Want to draw like Akira Toriyama? Then follow Toriyama’s 8-step program, demonstrated by the master himself to an audience in Germany.

This demonstration occurred at the Leipzig Book Fair in Leipzig, Germany, when Toriyama visited Leipzig in 2004.

This manga lesson coincided with Toriyama’s interview and signing session.

Toriyama’s lesson is scheduled into the program as the “‘How To Draw’ with Akira Toriyama Session.”

Given Toriyama’s shyness and concern over large crowds, this lesson was only witnessed by 200 people.

Altogether, the lesson and interview have been lost to time for the last 15 years. But recently a German fan sent me pictures of the magazine.

After all these years, I have translated the German text and present the lesson here for you and the rest of the world!

Akira Toriyama presented a world premiere at the Leipzig Book Fair! He showed how a manga page is made, live on the Internet. We wanted you to feel BANZAI! – Of course, readers missed out, so here we present you with the never-before seen…

First, you should think about how many pages you’ll make your manga, and then draw a storyboard. Simple sketches are enough. Now comes the pencil drawing. Here it is important to use a soft pencil (e.g. 2B). So you can erase it later without a trace. Next, the frames of the individual images (panels) are outlined with ink. Now he draws the figures with ink. The page slowly takes shape. On surfaces that are supposed to be full black afterward (such as Son Goku’s hair), he makes a cross. Star artists like Akira Toriyama, who have to do 20 pages a week, have assistants who take over the blacking-out of large areas for them. Thanks to the cross, the assistant knows what to make black. After the ink has dried (patience, patience!), the pencil drawing underneath is erased. Now the black areas are filled in. Whether you need an assistant for that, you’ll have to decide for yourself… 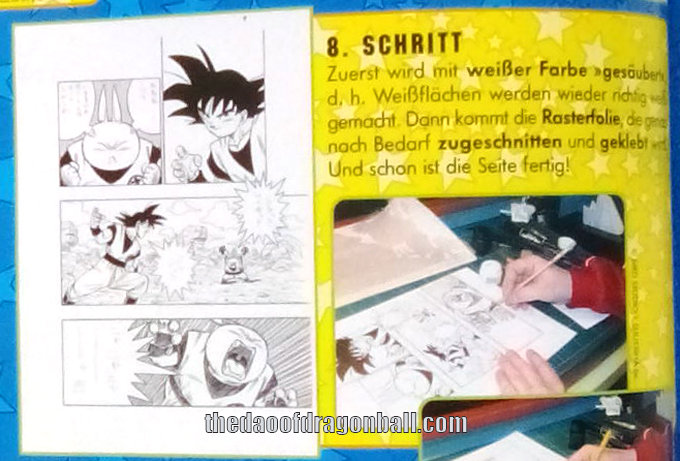 First, “white” with white color, i.e., white surfaces are made clean again. Then comes the screentone, which is cut and glued as needed. And the page is ready! In the end, Toriyama-sensei leaves you with his work material. Incidentally, he has been using the same brown pen for more than 20 years, without which he says he could not draw.

Akira Toriyama has repeatedly emphasized at the fair how important it is for him that German manga illustrators develop German manga with country-specific elements. In the beginning, it makes sense to copy as many manga as possible, but having your own style is the alpha and omega of manga drawing. This little drawing show should give you suggestions, but you have to implement your own ideas. Have fun with it!

A manga lesson 15 years in the making!

Who knew that Toriyama’s method was so simple?

Are you an aspiring mangaka? Did you learn anything new?

Has Toriyama ever inspired your artwork?

Leave your comments below.